The Long March of the Chinese Commies

All Commies are equal, but some are more equal than others.
Comrade Mao takes a few hundred mile breather on the march: 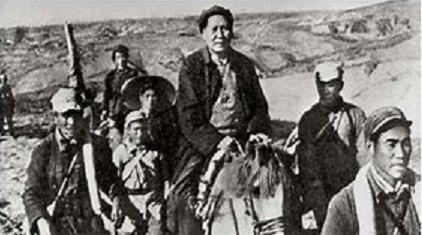 This post comes out of left (yes, LEFT) field, though Peak Stupidity did mention the 1934-5 Chinese "Long March" back in one paragraph in the post called Long Marches, never-ending marches, and Revolutions. I've been reading through this Wikipedia article and another on the site Alpha History about this period of Chinese History near the beginning of the 1st phase of this (of many in the 5,000 year history) civil war. (It had to be interrupted for a few years in order to fight off the Japanese, with American help, I might add.)

The Wiki article seems fairly unbiased, as many can be, when the politics are left out. I was surprised to find the Alpha History site even disparaging this period in the Communist's history and Mao himself. It should be easy enough to find diparaging material on the tyrant/butcher/torturer Mao Zedong, but it's not as easy as it should have been.

If it weren't for the fact that the winners write the history, we'd be calling this whole deal the "Long Retreat" rather than the "Long March". See, the Kuomingtang, the Chinese Nationalists (and on-off-on-again anti-Communists) under General Chiang Kai-Shek had built fortifications all around the eastern province of Jiangxi (just west of Fujian province, which is 100 miles across the straits from Taiwan) to surround this first Chinese "Soviet" with its armed forces of 130,000 men, located in Ruijin, in the SE of the province (the closest big city being Ganzhou, with it's current population of 9,000,000, located about 600 miles SSW of Shanghai).

After a diversion in a different direction by some of the Red forces, of 86,000 people trying to break out past the fortifications of the Nationalists, only 36,000 made it out of the area, the rest having been killed or having deserted. The group headed west, through northern Guangdong province, then northern Guangxi province, into deepest, mountainous Guizhou. During this time there were power struggles among the leaders Mao, General Zhou, a guy named Bo, and a German Commie advisor named Otto Braun*. General Mao, who was able to remain in charge, moved his forces, the 1st Army, in a continual retreat from the Kuomingtang, sometimes back and forth and around-and-round, adding to the mileage. There were regroupings eventually with the 2nd Army and the 4th Army, but they resulted in more division again and both the other two armies had their own subsequent just-as-long (2nd) and not-quite-as-long (4th) marches to go. 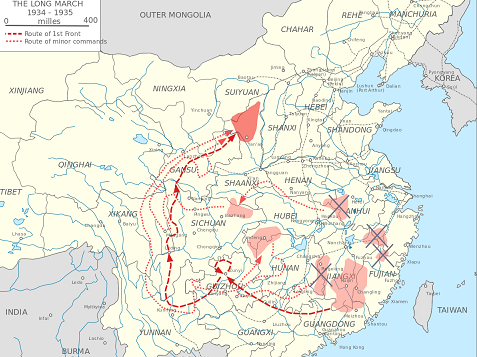 Almost until the end, the Long March was a retreat from the Chiang Kai-Shek's forces, with battles of all sizes along the way. One of them, the early-on Battle of the Xiang River, was reported to leave 40,000 Commies dead, and another, over the Luding Bridge (on the Dadu River), a famous victory said to be a fierce battle by the Reds, was reported later to be a skirmish in which the local warlords (no Nationalists) just turned and ran. The worst of it must have been the trek across the over 13,000 ft high mountain passes through the Snowy Mountains heading north from Yunnan into Sichuan province. Mao's Army ended up by the Great Wall in late October of 1935, with something like 8,000 people remaining of the 160,000 total people who had participated. I don't think any general in any army in world history would consider this a successful operation.

The length of that miserable trek is on the order of a round-trip from Chicago, Illinois to LasVegas, Nevada. I'd prefer the latter, myself. I'd much rather get my kicks on Route 66 than travel with a bunch of stinking Commies on the run in the backwoods of China. However, for a Commie with propaganda at his disposal, this Long March is a thing to celebrate and reminisce about. That town of Ruijin, where the Red Chinese had their 1st little Soviet, with their "28 Bolsheviks" (they were good with that abacus) is considered a destination for a pilgramage of the hard-core Commie, Mao-sackhanging set to this day. In the meantime, as bad as things are here, I'd rather be in the south side of Chicago (for not too long) or losing my blogging profits in the pits of Lost Wages!

* The Nationalists had their own Germans, including one Hans von Seeckt, who helped General Chiang in developing the plan to surround the Commies back in Jiangxi. "Whose Germans were better?" is always the question that crops up in military history.


Moderator
PS: Re your 1st comment, I guess it's coincidence. I had no idea the pussies were on the march at this particular time.

I will document everything for when Pelosi's boys finally catch up with me. I can explain EVERYTHINK!
Moderator
PS: BC, I didn't read that book, but I did read a book on the Burma Road. No, Vinegar Joe Stillwell did not have any respect for General Chiang. There was load of corrupton with his Nationalists, including with the distribution of all the materiel that was shipped in, including by air transport over "the Hump".

I didn't want go get into all of it, as I am no historian of any sort, but I probably should have mentioned that the Kuomingtang were not angels, and that was part of how the Commies came to be supported.

Another good book that starts during this era is called "China Pilot", which follows the AVG, Air American, etc. right up through the Vietnam days. I remember something about the evacuation of Muckden, now called Shenyang up in NE China (Manchuria).

About Fred Reed, I really think he does do a good job writing out what he sees. However, 2 weeks does not make him an expert, and I don't like when he exaggerates everything to the max. He had 2 good posts on his trip, but then started in on everything-American-is-bad and everything-Chinese-is-good.

I have been there a number of times, but also have something of an inside scoop.

Thanks for your interesting posts, again, BernCar
BernCar
PS: With no false modesty, I consider myself well-educated (especially by current standards), but when I dip into the history of China, I realize how lacking in knowledge I am. Alas, it must be; one must make choices, time is limited, but a young man could do worse than specialize in Chinese history in current year.

About fifty years ago, I read Barbara Tuchman's "Stilwell and the American Experience in China, 1911-1945" (an earlier publication of the book is more poetically titled, "Sand Against the Wind: Stilwell and the American Experience in China, 1911-1945"). Tuchman was bred of the elites of early 20th Century America (the "Homeland," if you will) and was old-line liberal, but I don't remember it coloring the book unduly, although, as I say, it was a while back and old-line liberalism in those times would be called Fascism today. In any case, I remember it being a good read and took from it a few points: China is a very complicated place and Chiang Kai-Shek was a loser (looser to my online friends).

Joseph Stilwell was in charge of American forces in the China-Burma-India theater of war, equivalent in responsiblity to MacArthur in the Pacific theater and Eisenhower in the European, though without the resources they had at their disposal. Vinegar Joe, an old China hand, was, as WC Fields said of Tom Mix, "no damn lace-pants cowboy." He was the real goods. Stilwell referred to Chiang Kai-Shek as "Peanut" and clashed continually with him, although to be fair, Chiang had to worry about both the Japanese and Communists. Anyway as you say, the winners write the history, and the American liberals of fifty years ago were not fans of the late Kuomintang and considered the lovely Madame Chiang a dragon lady.

I enjoy your pieces on China because as I alluded earlier I have a lot to learn. I understand that your expertise is not up to the level of a Fred Reed (who recently took a two-week vacation in China), but do keep trying, will you?
BernCar
PS: I note a strong correlation between pussy hat marches and your essays on communism. I would have a good explanation ready if I were you. Lord knows what kind of totalitarian riffraff lurks online these days.