I'd not make fun of the guy if he weren't a damn liar. 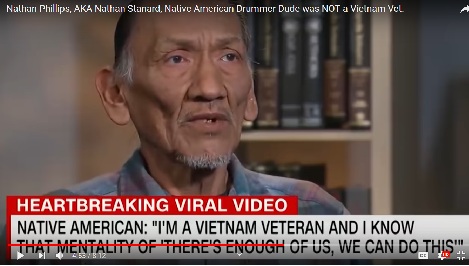 As Mr. Steve Sailer is one of the go-to guys for the real stories on many of the race-hoaxes and general anti-white events of animus, I link again to his writing in WaPo Corrects Itself: Nathan Phillips Didn't Fight in Vietnam. It's about one particular detail regarding the Covington Kids*, this annoying Nathan Phillip's status as a Vietnam (era) Veteran in the Marines. As I've written before at least once, Mr. Sailer can a bulldog on these things. This veteran status may seem like a small detail, but once you catch someone in a solid lie, you can then rest assured that there was, is, and will be, more BS out of him, with help from the Lyin' Press.

The debate is over the use of "Vietnam" by this guy to show himself as some brave warrior. Well, a "Vietnam-Era" Marine veteran is NOT the same as a Vietnam veteran, someone who spent time as a soldier, sailer, or airmen IN, OVER, or ABOUT the war zone. One could also break it up further into those who actually shot and got shot out vs. a mechanic at the motor pool in Saigon.

Anyway, plenty of details are in that post and comments linked to just above, but I've just got a point to make from observations of video of this guy. Before that, just from having heard of this Nathan Phillips, I think the term "Elder" sounds like a bunch of hooey in addition to the Vietnam-vet confusion. What exactly does this guy mean by his status as an Elder? Does Elder Phillips really pass down lore from to the rest of the tribe through the spirits of the ancient ones at the campfire every moon or two? Or, does it just mean that he gets 15% off at the early-bird special at the casino? I believe the answer is much closer to the latter.

The very specific wording about this guy's time in the Marines (apparently stateside in Nebraska and southern California as a refrigeration tech. and a rifleman, without work in the 2nd field of course) is a function of news reporters, the wording of the guy's statements, etc. I won't call him a liar over that. However, upon looking at the video here, passed on by a commenter on unz, I saw from just 15 seconds of the 8 minutes, that yes, he IS a DAMN LIAR!

About this video, let me just say here that this guy (the dude on camera) is pretty damn entertaining, and I love his sales pitch at the end (“… for the price of a 6-pack of Blatz Beer …” haha!), though I never got the dude’s name. Please go back an watch the whole 8 minutes if you have time.

Anyway, let me explain where Nathan is a liar here. Start at 05:42 with “I’m a Vietnam-times veteran…” OK, that’s no lie, as American men were in the war during the 1st year or so of his time in the Marines. However, he continues using this “Vietnam-times” bit to explain that this means “I know that mentality, that ‘there’s enough of us, we can do this’.” I don’t know what/who exactly he means here, but that’s not my point.

What kind of particular “mentality” does he know about just because he was a refrigerator mechanic and rifleman in Nebraska (when he wasn’t AWOL in southern California) that someone outside of this “Vietnam times” window would not?? If he had been in-country, etc., he indeed could brag about some special mentality that he has or knows about. However, if not, what the hell does he know that another former stateside Marine, whether in 1955, ’65, or any other time would not know? That’s the lie, people. From that 8 minute video, you only need to watch that 15 seconds to see he’s a damn liar.


* Maybe there are too many for them to be "the Covington 10" or what-have-you. That's too bad, as you know you are somebody if you are part of a group called the "So-and-so x" where x is any small positive integer.

Jimbo
PS: VDare link on national "emergencies" in the past: