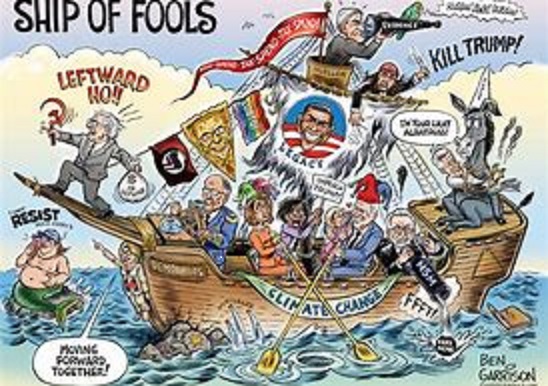 Four months ago, Peak Stupidity posted a review of a review of our #1 youtube pundit Tucker Carlson's recent book, Ship of Fools. That post points to a very good VDare review by Jake Bowyer, along with amazon.com reviews. The latter were mostly just political arguments, as amazon review of anything controversial become, though amusing nonetheless. The book wasn't then out yet for perusal by the PS editorial staff, but the library finally had a copy available (for some reason, we did not get sent an advance copy in the mail - damn Postal Service!)

This will be split up into two parts, simply because I've only read 1/2 of it yet. It's very quick, easy, and enjoyable reading - don't get me wrong. I read 1/2 of it in < 2 hours yesterday and I just wanted to discuss it while it's fresh (very different from most Peak Stupidity book reviews, I'll admit).

The "Ship" is our nation, and the "Fools" are not the American people (though many are!) but our elite that "run" the place. Mr. Carlson's introduction lays out his theme that the elites of our country don't feel any "noblesse oblige"* toward ordinary American-heritage Americans. Tucker inserts his explanations of why that has become the case in various places.

The first two regular chapters are descriptions of how America is off the rails in terms of immigration/dieversity and then foreign warmongering. This is very much why Steve Sailer had written some months ago (very hard to find right now) that Mr. Carlson could have read his writings on unz to get his background. That's not saying (by either PS or Steve Sailer) that he DID, as ideas can come independently. Two things come to mind to support it. One is a sentence about the Lazarus pro-immigration poem bolted somewhere on the Statue of Liberty (well after it's reception from the French in 1876, BTW) as if it were a part of the Constitution. That's almost "straight from", though maybe "just like" is the case, Sailer's "Zeroeth Amendment" meme that he uses a lot. The second is the first two main chapters themselves. They are basically and evisceration of the "Invite-the-world/Invade-the-World" behavior of the American elites broken into the two parts (in that same order, too)!

In these two chapters, the reader here will immediately recognize all the stupidity in both those realms that has been destroying American society and political/economic respectability, respectfully, over the last 5 decades. It is good reading, with a few anecdotes of Mr. Carlson himself and some of American political history that one may have not heard of. That was all very enjoyable.

Within these main chapters, the big concept from Mr. Carlson is that bad things are happening in American politics because the left (still called "liberals" in the book) have NOT been pushing back against the right on both issues, massive immigration and foreign interventionalism. This is not at all to say that Mr. Carlson is left-wing. If you've seen him on TV or youtube, you'd know better. In fact, he starts off with some humorous stories about his liberal elementary school teacher in 1970's California - great stuff too! As Mr. Sailer had written in his review, Carlson melds elements of the left and right. He is a labor union supporter, discussing the history of anti-immigration farm labor union leader Cesar Chavez in good terms, along with other (at least non-government) unions. On the foreign-policy side, he is not just rightly against the Neocons, but very pacifist in general. The latter is not a bad thing, but in his short political history, he seems to give short shrift to the Cold War, IMO.

It's all pretty even-handed, though. None of Mr. Carlson's "liberal" views are anything like the ideas of the current left in, say, the Democrat squad of The Party. Just glancing ahead, I see that Tucker has chapters that criticize the anti-free-speech Orwellian Stupidity of the modern left along with the Genderbender madness that would not be a real issue in politics in a serious country.

Here's where I have my first problem with the ideas in Ship of Fools: Mr. Carlson discusses how the elite, with their lack of noblesse oblige, are destroying the country for their own benefit. These people are supposed to, per Carlson, lead us better, as the political and business elites did in the old days. In the American politics of the past, he notes that the pro-labor, anti-war left fought the pro-business and more warmongering right** at every turn. Now that they've gotten together within 3 decades*** to all be pro-warmongering and pro-industrial-scale-immigration, the general American public has been screwed. (Mr. Carlson gives a nice page or two to nailing Max Boot and his position as expert on American aggression, with Lyin' Press complicity, is GREAT STUFF. If you've not heard of him, Max Boot, an immigrant from Russia is basically Chief of the Neocons)

Wait, where's the problem, now, the reader may well ask? The problem is that Mr. Carlson comes off as slightly too Statist for me. I've seen a lot worse, and still very much like Tucker Carlson, but his words read as though this "ship" can bet turned around - that we just need to be lead better. I haven't read his conclusion yet, with any solutions (tomorrow, I guess), but his problem description seems to be rooted in our having the wrong elites. Yes, Mr. Tucker, they are terrible. Who voted for these guys? Who supports the big business elites? Do people that support the Zuckerbergs and John McCain have real choices? How much and for how long has the public neglected to worry about encroaching Big Government? Maybe people a lot bigger and more sinister are behind these elites. Possibly they all have too much power due to Big-Government and the resulting Crony-Capitalism (bordering on actual economic fascism). Is it just a matter of the wrong people leading us? I differ with him on this. I'd rather we be lead LESS. But then I'm just some "muh Constitutional" fool.

I'll read the rest of Ship of Fools within a day, time permitting, and get to Part 2.


* It's not that it's hard to figure out the French term, meaning "the obligations of the nobles/elites", but I included this as-of-yet unread-by-me wiki link because the book really leans on that concept.

** The right being more pro-war was really only the case during the Cold War, anyway.

*** A small quibble here is that Carlson says "one generation", which would mean only back since ~ the later 1990's, but in further writing, he notes "since 1985", so more than 3 decades.

Moderator
PS: I can't take credit for noticing the melding of left and right ideas in there, as I'd read Steve Sailer's post on this book (referred to in my post back in October). I highly recommend your (any anyone's) reading this book. I hope I can get the 2nd part in today, as I am about 60% through, but other things have come up today.

The only reason it's taken me so long to get to this is simply a long line of people at the library reading it first. ;-}
BernCar
PS: Your review is the first I've seen of the Carlson book (I haven't read it myself) that gives a nuanced view of Carlson's position. Most see his view as bordering on dissident right. I think you are correct to see the old (say, pre-late 60's) liberalism informing Carlson's opinions. To many of today's pundits, left vs right even in historical terms means "progressives" opposing neocons, but there was a Carlson-like left (Hubert Humphrey liberals) and a traditional conservatism that was the political dichotomy in the US for much of the 20th century. Existing alongside and distinct from these two camps was a populist strain with roots that go back to the Andrew Jackson era and that resisted the idea of an enlightened aristocracy exercising a benign leadership over their socioeconomic inferiors. I think Pat Buchanan exemplifies the traditional conservatism with a populist twist; that is, better to have limited government in general, and let the do-gooders leave the citizenry alone, though government does have a role at the national level to resist aristocratic noblesse oblige that, when examined closely, too often manifests itself as narrow self-interest .