Hate Crime? He just "hated" not having enough money for diapers: 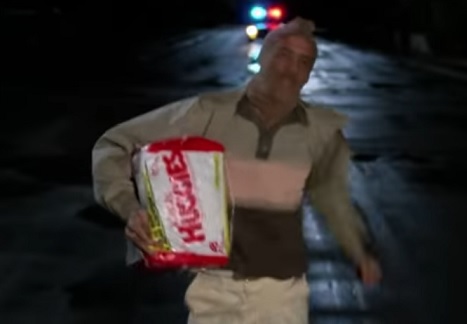 The entire "hate crime" designation is both stupid and unconstitutional. I ran across one of my favorite bloggers, Steve Sailer, supporting the concept and (more practically) charges for hate crime in one of his comments here under his unz.com post . Just when you not only think people are very intelligent, but agree with about everything they write, you run into this crap. The problem, in my opinion, is with even the best politically incorrect "noticers" among us, is that they still may not understand the reason to have basic principles. I have lambasted the Libertarians before, but it'll be time, in a subsequent post to do the same for the alt-right/conservatives on this score.

The particular comment written by Mr. Sailer was in one of his (probably nearing a dozen) posts on the ridiculous Jussie Smollett hate hoax. You you may have read in our one post earlier this week, Mr. Sailer was way, way ahead in noticing, or more likely, having the courage to write about what he was noticing, about these hate hoaxes for 1 decade and 1/2 already. (His original article is here for reference, and with new comments.)

Peak Stupidity is not trying to be an iSteve stalker or something like that, but this comment from an otherwise very intelligent guy illustrates our point well here:

E.g., if young Liam Neeson had beat up some random black guy to avenge some other black guy raping his loved one, that ought to be a hate crime. Society has an obvious interest in discouraging these kind of attacks because they can spread indefinitely.

But if young Liam Neeson tracks down and beats up the actual rapist, but calls him the N word while doing it, that ought not to be a hate crime. It ought to be a regular crime, because society also has an interest in discouraging people taking the law into their own hands, but specific vengeance has less severe potential than random vengeance on a group.

[Bolding by PS] No, no, no! Bullshit. There ought not to be "regular" crimes versus "hate" crimes. What is the distinction, motive? Motive can indeed result in different charges, such as involuntary vs. voluntary manslaughter. I'm no lawyer, but I do understand that. However, adding this additional layer or "property" of the crime, not just as in "armed robbery" vs. "burglary", but "1st-degree murder" vs "hate crime 1st-degree murder" turns it into 2 crimes, meaning double-jeopardy for any defendant. The guy can be found innocent of the murder but still guilty of hate crimes based on words uttered during the incident. Also, the hate crime" plug-in, as it were, can be added to any other kind of crime.

Nah, killing an innocent black based on hot-blooded anger has no worse effect on the victim than if it were just Mr. Neeson shooting his gun at the nearest person of any race who is completely innocent. If you start making new crime designations based on the effect on the community, you are far, far from the ideas developed over 1,000 years by our British/American forefathers.

What’ll be next then, making up new crimes of bad speech due to the effect it has on the population that doesn’t want to hear it? Though that’s not been encoded into law, it’s been effectively used to force cancellation of political talks that bring up “sensitive” issues (Ann Coulter, James Watson, etc., as Mr. Sailer very well knows about. This stuff can easily creep away from just violent criminal acts to all kinds of crimes, and we've seen it.

Constitutional problems with this charge:

1) Double jeopardy, per Bill of Rights, Amendment V: ...nor shall any person be subject for the same offence to be twice put in jeopardy of life or limb ...

2) At the Federal level, all this bullshit is illegal per Amendment X anyway: The powers not delegated to the United States by the Constitution, nor prohibited by it to the States, are reserved to the States respectively, or to the people.

If the alt-right are simply going to ignore any "muh Constitution" (their words of disparagement) arguments completely, they could always go back to their common-sense and see the stupidity of the hate crime idea. The stupidity of going along with this fairly recent concept, probably hardly heard of in the 1980's, and still laughed at in the 1990's, has multiple components:

1) Hate crime law won't be ever used against black people, hispanics, and any other privileged races/ethnicities who have done violence to whites. I ask anyone who's ever heard of a case to please comment. No, even the terrible double rape/torture/murder of the young white couple by black scum in the Knoxville Horror case (still undergoing "justice") did not result in hate crime charges. It'll never happen. Why do you expect this to change?

2) This hate crime-plug-in has already been encoded into law to arrest Canadians and Europeans for "hate speech", formerly no crime at all. George Orwell's 1984 thought-crime is a reality. Is it not stupid to rely on 9 politically-motivated robed fools as the only impediment for the same thing happening here in America?

Do you have ANY principles at all, pundits of the alt-right?