They could have all been burned to death: 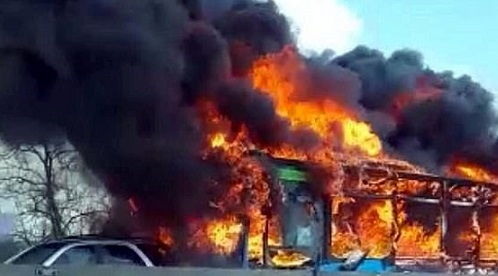 
For some reason there aren't as many headlines on the hijacking of 51 Italian school kids by an immigrant from Senegal, (some call him an "Italian man"), as the huge infotainment fest due to that mass murder at that mosque in New Zealand has produced. (Though, here is one.) Is it because it's so far away, over in Italy there, 6 time zones away? Well, Christchurch, New Zealand is a whole lot farther than that more most of our readers. Oh, it's because no one got hurt, right. Then again it was a near thing, as police/firemen arrived in time to get those kids out after the African immigrant DID SET IT ON FIRE.

How would you feel as a parent if your child died of burns and/or smoke inhalation due to some sick fuck like this, and would you exact revenge? Would you just go with the flow, and live with the sorrow, knowing you are a good person though, and still don't want to be one of those Xenophobes or Racists that resist the importation of people escaping THEIR shithole continent that has up to near 1 Billion people? Oh, well, "all's well that ends well", is that it? WTF ever happened to "Do it for the children." and "If it can just save one child..."?* Should we not shut immigration down from any country whose emigrants include a lot of people who rape and murder - I don't think they care who's a child or not either - it's whom they are.

Would this almost horrible-massacre not be a rallying point for the patriotic Italians. Are there any of those left? Well, while I have one finger pointing at the Italians, I've got 3 more pointing right back at the good old US of A. We didn't learn from Waco that our own government may DIRECTLY murder men, women and children with bullets and gas now and then. We didn't learn squat-all from the 3,000 people (many of them burned to death too) on 9/11/01 either. We allow more Moslem immigrants in (getting toward 7 Million) than we ever did before 9/11.

There are many decent immigrants who've become Americans over the years, but it never works in large numbers, and you don't just let people in your home willy-nilly, as Peak Stupidity explained before. In case you think this guy was just a hard-working Senegalese-Italian gone wrong, here's the long headline from the UK Daily Mail article linked-to above:

In case you haven't heard this easy-to-miss story, the headline explains why this "Italian" hijacked the bus. It was to protest the Italians' (those with some courage and concept of duty, anyway) turning away some of the boats full of Africans crossing the Mediterranean Sea. "Africa - Arise" he says. It's not right that the Italians don't let every African that wants to, settle in Italy, he thinks.

I'll tell you these low-IQ Africans really don't get it, or if they do get it, they've got a lot of damn gall. If the Western man ever really gets his shit together in order to avoid cultural suicide, these Africans may someday learn that the West could easily just wipe out that whole shithole of a continent. As much as I don't think that'd be right and also don't blame the many decent individuals caught up in the maelstrom, things could one day get out of hand. It's really best if this gets taken care of sooner rather than later, but later better than never.

I just thought back to the bus hijacking itself and near-thing for the Italian children. I reminds me of the first Dirty Harry movie.

Of course, for even 1971-level Political Correctness reasons, the crazy, sick "perp" is a white guy (though you gotta appreciate that the Dirty Harry movies in general were not very PC). Just one Harry Callaghan won't cut it for the big picture here, with the state that the West is in. It's gonna take a metric shit-ton of Harry Callaghans to stop the people behind this immigration stupidity. 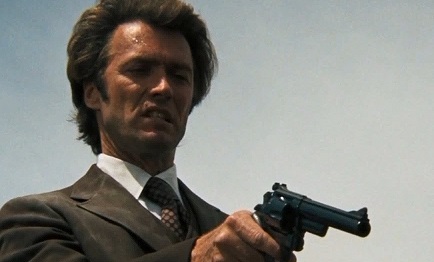 * That trope tripe was the old anti-gun crap by the compassionate ones that never ever seem to think about self-defense, from either an individual or whole country gone wrong.

Dtbb
PS
Ok. Thanks for the answer. I was wondering if maybe you were going all out for 1000. Congrats by the way. I think we have a ways to go before reaching peak stupidity. First female president will probably be it.
Moderator
PS: Thanks, I just got to reading that Working Class. That's some high-level serendipity that you gave me this link just now, as this article may be a good one to get me going on Post 1000. Now, the cartoon guy is 63 years old, as the article is from '16.

"But I want him to have this devil-may-care attitude, someone who can maintain a sense of humor while the world is collapsing around him." Hey, I resemble that remark.

I haven't finished reading, WC, but right away, I see that I'v been spelling the name wrong for > 2 years! Haha, that was not to avoid a lawsuit, just a memory problem.
Moderator
PS: Dtbb, no I have been a slacker. This was the last one I wrote, back on Friday... geeze! I thought I'd put something special for the 1000th post up, but I dunno. Things will get back up to speed soon, though shortly after that, I really want to spend a week or two on the software. (It's not like I can't do both, as I have my computer "sandbox", but it's a matter of time.)

WorkingClass
PS and totally off topic.

I have been meaning to stop by and drop this link regarding the lineage of your mascot.

https://www.theparisreview.org/blog/2016/03/03/a-boy-with-no-birthday-turns-sixty/
Dtbb
PS
Have there been any posts after this one? If so I can't access them for some reason.
Moderator
PS: Yeah, how'd you know I wass pissed off? ;-}

You wonder how the women with their big "it's for the children!" cries, even for the smallest stuff, don't get riled up about this, but other than your Ann Coulters and Malkins of the pundit world, I haven't seen much. I wonder what will be said/done in Italy. 51 children almost got burned to death - you'd think that would matter to somebody there.

Anyway, thanks for writing in again, Dtbb. This was post #999.
Dtbb
PS
Great post. I can almost feel your frustration. Believe me I have plenty also. Well done.