"the right of the people peaceably to assemble ..."

Some semi-peaceably assembling, 14 years before the ratification of the US Constitution: 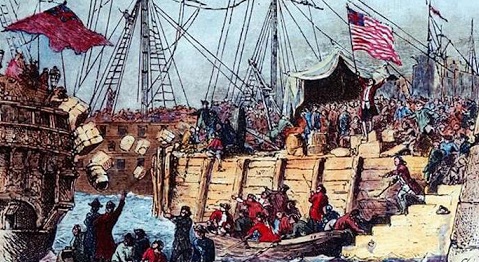 Straight from the horse's Founders' mouths, Amendment I, the start of the Bill of Rights, of the document:

Congress shall make no law respecting an establishment of religion, or prohibiting the free exercise thereof; or abridging the freedom of speech, or of the press; or the right of the people peaceably to assemble, and to petition the Government for a redress of grievances.

I don't really talk politics to any of the younger generations, Millennials in particular, if I even talk to them at all - they aren't into talking so much so long as they still have battery power. (This is not really personal, either, but they are not in my crowd.) It's just from what I've been reading, some on the answers to various questions from the GSS, (General Social Survey*) presented almost daily by the Audacious Epigone, and then the political news regarding events such as the Charlottesville street battle > 2 years back.

My general feeling is that young Americans, even of the not-foreign persuasion, are no longer rock-solid down with the basic concepts of freedom and the rights of men, as understood by the Founders of the US, The 1st Amendment covers a lot of what the Federal Gov't was NOT to do, and per Amendment XIV interpretations, limits other jurisdictions the same way, if the constitutions of the various States don't already cover it (most do). In particular, this post is about the right to peaceably assemble for, when it comes down to it, raising hell. I'll cover another part in an upcoming post.

Pretty much most Americans seemed to (more on this near the end) agree with the Founders and understand the principles enshrined in the Constitution until fairly recently. What has changed the minds of young people today compared to people of the same ages in, say, 1985?

The schools are a big culprit. They don't teach anything resembling the old civics, any serious American history or Western Civilization. After all the emphasis on the woke racial, genderbender, and feminist bullshit, the big picture of history will be distorted completely out of a normal perspective for our school kids, and there's no time left to go over real history and civics. You've got to teach them this stuff at home - if you can Homeschool, Homeschool, Homeschool! (Ron Paul not only agrees, but he's got his own curriculum.)

When it comes to the particular question of whether people are within their rights to mass together in ANY public place and hold signs, yell and scream, make chants (hopefully some new ones!), we know where our Founders stood on this. The famous Boston Tea Party protest, as depicted above, is above and beyond even this. Those were private ships. The Captains and crew were likely innocent of anything the Colonists were up in arms about. They were just shipping tea, for cryin' out loud. That was some hell-raising and destruction, yet it is seen as a great step in the roots of the Revolution that founded our country.

After that, it seemed to be common sense that any group of people could assemble wherever they desired, other than on private property without the owner's consent. The "peaceable" part is a bit tricky, as blocking traffic is not so peaceable, or questionable, at least. Either way, through American history, and in a large way in the 1960s people understood this. There were no "protest permits" ALLOWING your group to stay within this boundary, or inside this little caged area about 2 miles away from anywhere.

During the turbulent 1960s, this was an everyday thing almost, and groups of 1,000s raising hell, blocking this, barricading and taking over buildings (see, not too peaceable, some of that) was considered normal for a while. Yeah, some even got arrested, but as I've written "you can't arrest all of us!" Even though the conservatives in society wanted to end all this, it was about the radicals' demands and destruction, not about their right to assemble in the first place.

See the ctrl-left at the time had not yet infiltrated the institutions. They needed, and one could say abused, the US Constitution to keep out of too much trouble. All that due process, rule-of-law-not-men, the Bill of Rights, and so forth? Yeah, the rest of the country still understood and agreed, and the left used it to the max. Habeas Corpus, "he forgot to read me my rights" (not in the Constitution), technicalities, and "this whole trial's out of order", yeah, the left of the 60s LUVED LUVED LUVED that US Constitution, or so it seemed. What happened?

I'll tell you what happened. The ctrl-left IS the establishment now, you know, the one they used to complain about in words and song. They really don't need all that Constitutional mumbo-jumbo now to get their way. It may even be an impediment.

A few dozen or so conservatives wanted to peacefully assemble in Charlottesville in August of '17, not even in anyone's face or on the street, to simply display their concern for the desecration of Southern heritage. There should have been no problem with that from all parties in understanding of Americans' rights. The left could have just let them be, like conservatives would have a group of radicals having a sit-in on the Washington Mall - let 'em be! This was not 1965, though. In 2017, the deal was that the left would not let this stand. Those guys at the Robert E. Lee statue had to be made to understand, in no uncertain terms. that this wasn't permitted. To defend their rights, these guys were rightly prepared to fight back, for a change, I should say.

After the anarcho-tyranny was all said and done, you've got guys on the right still in legal trouble and a Mr. James Fields in jail for some kind of 400 year sentence for what is at worse case manslaughter. (Did he purposefully back the car up into that specific girl? Sure, I know she was a big target.) A cold-blooded murderer of a whole family would get less than that. More to the point here, if he was a lefty in 1967, he'd get the usual shyster lawyer, who'd bring up some technicalities, and probably spend only a few months in jail.

The left is not playing the same game anymore. They want nothing to do with Constitutional rights. Young people, even not of the left, are not being taught enough to understand why our wise Founders prescribed the right to peaceably assemble wherever we want. I'll get to freedom of speech in another post. This is not gonna end too well.


* Per wiki here, the General Social Survey is a sociological survey created and regularly collected since 1972 by the National Opinion Research Center at the University of Chicago.

Moderator
PS: Bill H. I can include some of your comment in my coming post on the lack of concern for that basic principle in that next post. I had intended to write that, along with another quick one, today, but you can read on the home page that I got sidetracked.

Yes, these people are unclear on the concept.
Bill H
PS Watched an interesting clip on Liberal's "take" regarding freedom of speech. The background is a young woman who was a teaching assistant at a college. She played a YouTube in class of Jordan Peterson on the fallacy of the modern gender pronoun nonsense, and was fired for doing so. Numerous applications of "freedom of speech" not only did not save her, but subjected her to even more threats and intimidation.

It seems that Liberals now hold the position that the only reason that one might insist on "free speech" is because that person wants to air vile, hateful and evil rhetoric, usually about racism. If you are a decent person, you do not need to talk about freedom of speech.

Similar to, "if you haven't done anything wrong you don't have to worry about your phone bring tapped."

Therefor, Liberals not only refuse to allow freedom of speech, they will abuse you for even demanding the right to have free speech.
Moderator
PS: Hello again, Dieter. I'm glad you're reading. Yes, we can be reached from all over the world, no roaming charges. I don't get the spelling question. "Peek" is a homonym though.
Moderator
PS: Thank you, Cthulhu. Fixed. I gotta slow down my proofreading.
cthulhu
PS didn’t you mean to say “rule-of-laws-not-men” instead of the reverse?
Dieter Kief
PS My general feeling is that young Americans, even of the not-foreign persuasion, are no longer rock-solid down with the basic concepts of freedom and the rights of men, as understood by the Founders of the US, The 1st Amendment covers a lot of what the Federal Gov't was NOT to do, and per Amendment XIV interpretations, limits other jurisdictions the same way, if the constitutions of the various States don't already cover it (most do).
I come from a nice restaurant here in the neighbourhood where I had dinner with my wife tonight and our subject was exactly this one you wrote about above. Now - how's that? The Peek*** Stupid's International is marching on!

*** isn't this their actual spelling?