Congress shall make no law ... or abridging the freedom of speech ...

(Second in a series on young people's disregard or ignorance of the basic rights of Americans, starting with the right to peaceably assemble from last week.)

You've gotta watch it when a blogger, or worse yet, "journalist", puts those ellipses (the ... kind, not the math kind) in his wording. Therefore, let me spell out the wording from our Founders again, for any reader who can't make out Jacob Shaullus' handwriting:

Congress shall make no law respecting an establishment of religion, or prohibiting the free exercise thereof; or abridging the freedom of speech, or of the press; or the right of the people peaceably to assemble, and to petition the Government for a redress of grievances.

Straight outta' Compton Philadelphia, bitchez! Note carefully that this right is not to be abridged by the new Federal Government being brought into being by the document. (It's Congress, per the wording, but that's who supposedly makes the laws - note that, you black-robed fools) It has no limits on what other jurisdictions could do. There are 2 arguments to that:

1) I don't want to go reading 50 State constitutions, but I'd venture all of them have limits placed such as that on the Feds on restricting speech.

2) The incorporation doctrine interpretation of Amendment XIV (discussed in the recent previous post on the Constitution also limits State governments in this regard.

This whole "freedom of speech thing" is just another basic natural right that Americans were to be protected against government abridgment with by the Bill of Rights that seems not to be important anymore, especially for young people. Per a 3-month old post by blogger "Audacious Epigone" again, called The Closing of the Millennial Mind", young Americans don't get this so much: 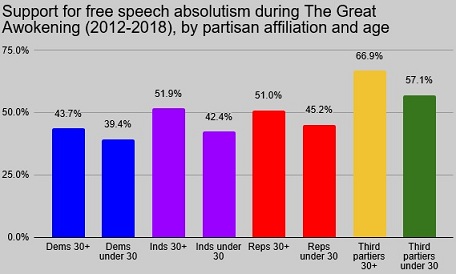 I want to digress for a paragraph or two about this graph and others by blogger Audacious Epigone (on unz.com), so bear with me. Mr. Epigone (not his real name, and you'll have to look up "epigone" yourself) LUVS this GSS (General Social Survey and writes ~ half his posts based on data from it, with the nice (usually) bar graphs*, such as that above. I'll link to the Wiki description of this survey again, but, for those so inclined here is Mr. Epigone's link to the GSS itself (from this particular post).

The reason I am not particularly inclined to go to this GSS survey is that polling data is very easily made worthless by stupid questions and questioning methods. This GSS must be composed of hundreds is not thousands of questions, so one can make hay out of all kind of combinations of independent variables (the demographics of respondents) and the dependent ones (survey answers). Audacious Epigone can keep these interesting posts going for years with this, but on a good portion of them, the way the questions are worded and/or the limited choice of answers makes the conclusions drawn questionable.

That all said, back to the graph above, the lack of principles of these Millennials on this issue is something I'd have expected, and I have seen it elsewhere. Respect for the US Constitution is one thing - if one takes the actions of the US Feral Gov't over the last 5 decades, maybe since a century (Peak Stupidity/Amity Shlaes on "Silent Cal"vin Coolidge), this is almost a lost cause. However, the basic principle itself, elucidated by Voltaire** on the internet as "I Disapprove of What You Say, But I Will Defend to the Death Your Right to Say It" is not something most agree with anymore. Nobody seems ready to defend anything with even a nice blue-check-marked tweet nowadays, much less to the death!

There are 2 things going on here with this likely permanent trend away from this most important idea required for any kind of free society:

1) Just as with the loss of support for a serious right to peaceably assemble, support for freedom of speech by the loudmouths of the left was BIG BIG BIG 50 years ago. The University of California flagship campus in Berzerkely, California had its Free Speech Movement 55 years ago. This was just the beginning, as the left of the 1960s was part of a generation that had everything to say about anything, some of it civil, but most of it argumentative and taking free speech to its limits of the purposeful incitement of riots. Good on 'em, up to that point.

However, as written in the previous post, the left runs the institutions now. That includes lots of the "justice" system too, especially at the Federal level. They really can't have their political opposition stating their cause out in the open. The internet has not been helpful in the left's 50-year-long effort to contain the narrative, originally easier for them via TV and newsprint. They are working hard on that now. (Peak Stupidity has this important new issue of the Tech Totalitarians, but we'll leave more of that for future posts.) Is it likely that the ctrl-left of the 1960s really didn't care about the Constitution so much as just causing the kind of turmoil they wanted to cause?

2) The young people of today of all political stripes have been indoctrinated, even before their "higher education", in the government schools. Due partly to the matriarchy that runs and works in Big-Ed, and the fact that the left has infiltrated, it's been a long time since kids were taught the whole "sticks and stones" bit. The word "bullying"*** no longer means the slapping up-side the head and literal shaking down of lunch money of the wimpy kids by the nastier big kids. It's about words now too. The distinction between actual violence and words had been removed.

Now grown up, these young adults of the Millennial Generation are of the opinion that, yes, just like sticks and stones, words CAN hurt you. That is truly a feminine concept, as you'd think young men, at least, would get over their feelings, or at least know that principles rule over feelings. They don't get the difference between physical violence and hurt feelings, or at least until getting bashed on the head with a bike lock.

This is a very bad trend, people. Our Founding Fathers would be just plain ashamed if they could hear this crap out of the Millennials. Said one in particular, the guy that Millennials only know from his craft beer:

"If you love wealth greater than liberty, the tranquility of servitude greater than the animating contest for freedom, go home from us in peace. We seek not your counsel, nor your arms. Crouch down and lick the hand that feeds you; May your chains set lightly upon you, and may posterity forget that you were our countrymen."

It's even worse than that. It's not even about their wealth for these kids - they've got none. They just don't want anyone to have to suffer any hurt feeeelinnngs.

* Two things I personally LUV about Mr. Epigone's graphs is that a) he regularly starts the y-axes at 0, as to not fool the viewer with false perspective (often done purposefully by others) and b) when the graphs display race/ethnicity as an independent variable, he uses white bars (or curves, as need be) for white people, black for black people, brown for Hispanics, yellow for Oriental (YES, HE DOES!) for a much appreciated ease in interpretation. Good on you, A.E.!

** Per "Quote Investigator" the quote is indeed from the 18th century Frenchmen who used the pen name Voltaire (no first name - I guess he was like Madonna or Sting in that respect). His real name was François-Marie Arouet.

*** This term and its misuse will be the subject of yet another post - they're piling up on the dock here!

Moderator
PS: Unless your repliers were under the impression that sticks and stones are to be used against kittens ... or something... But then, you gave them the little kindergarten-age rhyme in your response, Rex, so, , yeah, they are truly snowflakes in the sense of Peak Stupidity's topic key here.
Rex Little
PS: Spot on about hurt feelings being considered the same as physical injury. There's a lefty blog, "Pharyngula", that I used to visit occasionally when I felt argumentative. One time they were discussing cyber-bullying. I opined that the best response to online insults from people you have no live contact with is "Sticks and stones. . .". From the reaction I got, you'd think I'd advocated burning kittens alive.
Moderator
PS: Dtbb, I wish I could say I made these mistakes to see if anyone is reading, but that's not the case ;-} Thanks again.
Dtbb
PS: I thought F.M.A. was his real name, not Voltaire.
Dtbb
PS: testing