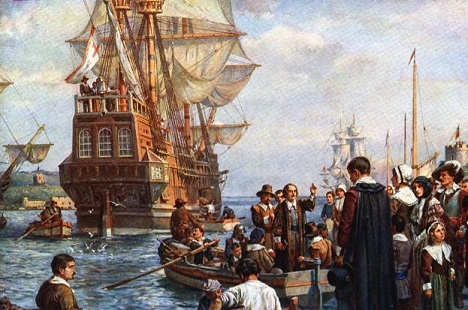 It was 400 years ago not today, but 6 weeks and 400 years ago tomorrow when the Pilgrims set sail from England to form a new community in the New World. It's not like Peak Stupidity catches these dates very well to begin with, but it doesn't help that the elementary school here hasn't taught A THING about the important historic voyage of the Mayflower this year. My boy did say that he learned about some of this last year. Well, that was 399 years later, not the nice round 400. I can chalk it up to his teacher's concentration on the "STEM" stuff this year to be charitable. Really, I think the educational establishment is fully infiltrated on not on-board with any White stuff. Do the teachers teach this history only at their peril?

How about a century ago, on the 300th anniversary? My reading on wiki led me to this paragraph:

The 300th Anniversary of Mayflower's Landing was commemorated in 1920 and early 1921 by celebrations throughout the United States and by countries in Europe. Delegations from England, Holland and Canada met in New York. The mayor of New York, John Francis Hylan, in his speech, said that the principles of the Pilgrim's Mayflower Compact were precursors to the United States Declaration of Independence. While American historian George Bancroft called it "the birth of constitutional liberty."Governor Calvin Coolidge similarly credited the forming of the Compact as an event of the greatest importance in American history.

Well, Peak Stupidity will post here and there about the voyage of the Mayflower through the landing and settlement in what's now Massachusetts, a place people this bold and adventuress would have sailed away from long ago, probably around the time of the Warren Supreme Court and way before the big dig. Even those deeply religious folk would have been prone to use the term masshole now and then, albeit sparingly ... to avoid the stocks or worse, the wrath of the politically correct, errr, massholes.

Imagine if someone on the Peak Stupidity staff had an in with someone in the Dept. of Education out in Washington, FS. Man, we should have donated to SOMEBODY, ANYBODY.! You get your guy embedded in that crowd, and he could add daily readings of Peak Stupidity to that there Common Core .... at least the Common Periphery. Make these pages required, so kids could learn about Christopher Columbus sailing the Mayflower over to India and shit ... Wait, see my elementary school kid said he was confused on this too ...

I had to relearn a few things, but then it's been a while. These religious outcasts, the Branch Davidians of their age, had been living in Leiden, Holland after they got out (some in the middle of the night) of England due to their differences with the Church of England. Holland wasn't big enough for the lot of their type so much either. The motivations to try something really different are described on the wiki page thusly:

However, life in Holland became increasingly difficult for the congregation. They were forced into menial and backbreaking jobs, such as cleaning wool, which led to a variety of health afflictions. In addition, a number of the country's leading theologians began engaging in open debates which led to civil unrest, instilling the fear that Spain might again place Holland's population under siege, as it had done years earlier. England's James I subsequently formed an alliance with Holland against Spain, with a condition outlawing independent English church congregations in Holland. Thus formed the separatists' motivating factors to sail for the New World, with the benefit of being beyond the reach of King James and his bishops.

Even 120-odd years after Columbus' first voyage, there had been only fairly unsuccessful attempts at building new communities in this huge New World, and any Atlantic Ocean-crossing voyage was still a dangerous endeavor. After the discussion of the motivations for the Pilgrim's voyage on the wiki page, we have some of the de-motivation:

Their desire to travel to America was considered audacious and risky, as previous attempts to settle in North America had failed. Jamestown, founded in 1607, saw most of its settlers die within the first year. 440 of the 500 new arrivals died of starvation during the first six months of winter. The Puritan separatists also learned of the constant threat of attacks by Indigenous peoples. But despite all the arguments against traveling to this new land, their conviction that God wanted them to go held sway: "We verily believe and trust the Lord is with us," they wrote, "and that He will graciously prosper our endeavors according to the simplicity of our hearts therein."

This one didn't mention the lost Roanoke Island colony on the in what is now Dare County, North Carolina 45 years earlier, and the first white person born of white parents in the New World, Virginia Dare.*

I found a website with a nice short, readable history of the Pilgrims and the Mayflower voyage on this "History Things" site. That's where the picture at the top comes from, and I'll quote from there some.

I'll just finish this post with a bit about the Pilgrims problems getting started with the actual voyage, seeing as this was about 6 weeks ago (and the 400 years), so we can catch up later.

There were to be 2 ships, the Mayflower and a smaller vessel named Speedwell . The Pilgrims had intended to start this voyage in August of 1620, for decent North Atlantic Ocean weather, but problems with Speedwell, as in leaks found in 3 attempted sailings, caused the eventual decision to take on 11 people from that ship (the rest stayed in London) and go on the Mayflower alone. Here's more detail from the "History Things" site:

(There had been an earlier leak, I think on the trip from Holland to England to meet up with the big ship.) That 3rd leak, after the August 5th departure, happened when the ships were already 200 miles out from Land's End, the southwesternmost tip of England.

The wiki page does have quite a bit more detail, and doesn't seem political (yet!) Going back to the departure of the Pilgrims from Leiden, their home, we read:

In explaining to his congregation why they should emigrate, Robinson used the analogy of the ancient Israelites leaving Babylon to escape bondage by returning to Jerusalem, where they would build their temple. "The Pilgrims and Puritans actually referred to themselves as God's New Israel," writes Peter Marshall. It was therefore the manifest destiny of the Puritans to similarly build a "spiritual Jerusalem" in America.

When it was time to leave, the ship's senior leader, Edward Winslow, described the scene of families being separated at the departure: "A flood of tears was poured out. Those not sailing accompanied us to the ship, but were not able to speak to one another for the abundance of sorrow before parting." William Bradford, another leader who would be the second Governor of the Plymouth Colony, similarly described the departure:

Truly doleful was the sight of that sad and mournful parting. To see what sighs and sobs and prayers did sound among them; what tears did gush from every eye, and pithy speeches pierced each heart...their Reverend Pastor, falling down on his knees, and they all with him...

That was pretty intense, especially for wiki. Can you imagine the feelings, leaving your and THE Old World entirely (after the rendezvous in Southampton, England) and going to a faraway wilderness, unreachable from the Old World, once the ship returned? There was no expectation of seeing the Old World and every thing one had ever known ever again.

We'll post occasionally about the Mayflower and the Pilgrims. This is no complicated nuanced political stuff, just some greatly deserved remembrance by we who have had it relatively easy in the New World our whole lives, 4 centuries later.

Oh, but they are going to issue commemorative postage stamps. So, there's that.

* If this sounds familiar, yeah, that's where the VDare website name comes from. Is this slight of the Roanoke Colony by wiki due to, you know, not wanting anyone to even think about Virginia Dare? I'm probably being paranoid. The lost colony does have a wiki page.

☮
Moderator
PS: That should have been 30 to 40 years ago, Mr.Senex, but better late than never ...if it happens.
PetrusSenex
PS " Can you imagine the feelings, leaving your and THE Old World entirely ... and going to a faraway wilderness, unreachable from the Old World, once the ship returned?"

Yes. Yes I can. Elon Musk and company going to Mars.
#Me2.
Moderator
PS: Pretty cool, Robert. I gotta look that up. Columbus got a lot of respect back then. Man, I bet that moving walkway was made out of wood mostly. They were just starting to use electric motors for all manner of things. What an important invention!
Robert
PS: Not really the Mayflower, but I grew up in a house (probably) originally built for the workers of the Columbian Exposition of 1893. (But like Thesseus' ship, replaced bit by bit.) A Worlds fair for Columbus! The first Ferris Wheel and the first moving side-walk, I think.