In a comment of mine under The Principal is no longer my Pal, I stated how unbelievably different the school environment is now compared to when I went to school. I don't want to pin things down, but it was quite some time ago in a fairly small school, kind of like this, but not:

There always have been ways to give kids the schooling they need without these ridiculous budgets that cost taxpayers $10,000 yearly per kid or parents directly $20,000 per year. The school I attended was a lean mean, learning (most of the time) machine. There was only one paid employee besides the couple of janitors that did not teach. The assistant principal taught class, and the sports coaches taught class, though with the latter, most did not do a great job at the teaching.

There was no attendance committee that would set up laptops in would-be deposition rooms for those who missed 3 days due to illness in a row but didn't email the right person. There was no "school resource officer", a cop, to put it in English. This is in an elementary school in a GOOD neighborhood, mind you! For the last couple of years, it was a nice lady, a foreigner from Brazil, you know, doing the school resource officering that Americans just won't do, but still a uniformed cop no less. She, and this year it's a guy, who helps direct kids in the crossings in the morning, another job that American 5th graders just won't do, had an office. I think they stay there the whole day. We had a cop come to the school maybe once a year, and this was when some teenager OD'd on valium or something, best I can recall, or some kid was in serious trouble and needed to go downtown.

Yes, 1/2 the juniors and seniors smoked pot in their cars in the parking lot in the morning, but that was off the school grounds (sort of) and apparently nobody's business. No, I did not participate, and I'm glad my parents were so conservative that I wouldn't have thought of it (nor known what the heck the valium business was even about). I was not one of those cool kids, yet that was better than the one guy, Steve. He wanted to be one of the cool kids, so he let the others know how high he had gotten from the one doobie ... that the cool kids had secretly made out of pencil shavings. Who knew pencil shavings were so potent? There's a way to cut your allowance money expenditures in half!

Sure, we flew burning paper airplanes out the window, and the French teachers only lasted 2 years max (that was something I've always felt bad about). Yes, there was one grade, I'm guessing 9th, in which every time a student opened the book up to the page requested, there was a penis drawn across it. There's no getting away from that stuff...

It was no learning utopia. We just didn't make a big deal out of anything. Yes, there was detention, but we didn't call the specialized room the RTC (the Responsible Thinking Center, I shit you not)*. It was simply the little room next to your Pal's office. For a while there, a suspension meant being sent home, with zeros given as grades for any tests missed. That was too sweet a deal, so they changed it to where you had to stay at school. 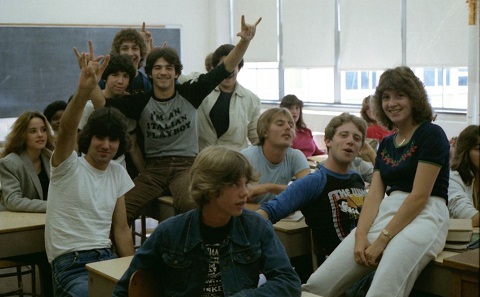 It was just a freer world, that's all. It's the electronics mostly, that are the problem, but the US Police State attitude has been a part of Big Ed, at least the government-run sector, since that time.

I can remember walking home from school out in this semi-rural area, after I'd found a good short cut. I had to avoid a few cows and get over some barbed wire, and then I was clear of all sight of the school and any other man-made structures for 1/2 mile or so. At that point, I was really alone, in a good way, and in a way that maybe nobody can be anymore, even out in the high Sierras. Nobody had his virtual eyes or ears on me. It was just me and my thoughts under God.

I've had thoughts that the electronic world that watches us is quite the opposite of God. I think the book We Will Harmonize You, though it's about China, has scared the BeJesus out of me.


Going even further back, school kids of the 1970s: 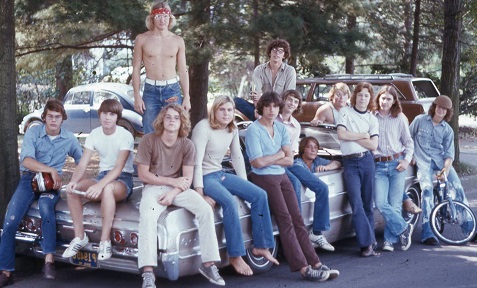 What a completely different world it was!

* I wonder sometimes if the RTC isn't used as a teacher's lounge when all the kids have been good, perhaps to smoke a doobie or two with the school resource officer. When it comes to obtaining some of that wacky tobaccy, some of these officers can be pretty resourceful... just sayin' ...

Mr. Anon
PS @Moderator
""Three O'Clock High" is on the way, Mr. Anon. Thank you for the recommendation."

You are most welcome. I hope you like it. Let me know what you think.
Moderator
PS: "Three O'Clock High" is on the way, Mr. Anon. Thank you for the recommendation.
The Alarmist
PS

One of the best things the Air Force did for me was to rid me of that awful ‘70s hairdo that I sported in HS. Walking home from school: Do they let kids do that nowadays? Before I could drive, I made a deal with my mother that I would walk the four miles to and from if we could split the money saved on the bus; half the time she’d drop me off in the morning on her way to work, so it was a good deal. The bus to our subdivision had so many stops that it passed me three times and arrived at roughly the same time I arrived on foot. Then we’d all get together and play outside ... with guns and small explosives. Different times indeed.
Mr. Anon
PS I suppose schools now have a prison-like feel to better condition the kids to being "good" (i.e., compliant, unquestioning, obedient) citizens in the ever more prison-like society that elites are building for us.

As somebody who was in school in the 70s and early 80s, I can confirm how much freer and easier things were back then. No cops on campus - they weren't needed - whatever discipline was required was provided by teachers and principals (the male ones). There were liberal and even lefty teachers who used their classes for propaganda, but they were rare and did not have institutional support. If you wanted to learn, you could learn. If you wanted to screw-off, you could screw-off. Some kids would depart campus at lunch-time and walk across the street to a market where they could smoke in the parking lot.

I was in college for most of the 80s and not plugged into the popular culture, so I missed the plague of highschool films like "Breakfast Club", "St. Elmo's Fire", etc. But this movie, which I only first saw while channel-surfing during the early days of the Scamdemic, I thought was pretty good: "Three O'Clock High"

It is, I think, a clever and entertaining movie, even an insightful one. I recommend it.

Moderator
PS: That's one of the things you can see in older movies too, Troy. The extras, the people in the background of many scenes, show how much more fit people were back then.
Troy
PS Not an obese person in any of those pictures. I bet a 2020 picture has only a hand full of non-obese students.