No Stupid Left Behind - starting with the little ones now

It's Mx Krabappel to you now, kiddies. 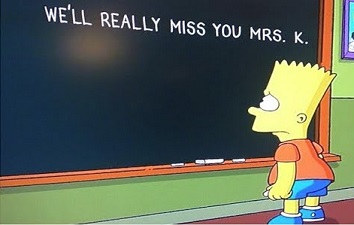 Along with the still-available commentary on the financial stupidity, and increasing coverage of political topics, ZeroHedge has become second to none ONE in the documentation of "all things stupid". Here they report Florida Parents Outraged After Teacher Demands Her 5th Graders Use Gender Neutral Pronouns (yesterday to be precise).

But, while such things are expected from our millennial youth on progressive college campuses, parents of a 5th grade class in Tallahassee, Florida were somewhat shocked when they received a letter from "Mx. (pronounced Mix)" Bressack demanding that her students only refer to her using gender neutral terms like 'Mx.' instead of 'Ms.' and "they, them, their" instead of "he, his, she, hers." Per the Tallahassee Democrat:


"One thing that you should know about me is that I use gender neutral terms. My prefix is Mx. (pronounced Mix). Additionally, my pronouns are "they, them, their" instead of "he, his, she, hers". I know it takes some practice for it to feel natural, but my experience students catch on pretty quickly. We're not going for perfection, just making an effort! Please feel free to reach out to me or administration if you have any questions. My priority is for all of my students to be comfortable in my classroom and have a space where they can be themselves while learning."

Just to expound on ZH's point, as we want to hold our own here in the "stupidity space", we will add a bit. Though exceedingly stupid and PC, and yeah, just stupid, it's one thing for this pronoun silliness to be brought up at the University by the Cultural Revolution II folks. At least the students are allegedly not kids anymore and can think for themselves (hahah, OK, something like that). They also have a chance to let off steam and party for 4 years on the, most likely, taxpayers' dime credit card. Why not take part in some dumb protest or seminar about the newest thing in PC, so long as it gets you laid? (that point is unarguable.)

You do have some options at the University if you are one of those odd, sane individuals who is sick of all this. Let's see, yeah you can fail out, if you speak up a lot. You can just make decision to bug out to a real college where they, like, study and all.

As for the little ones, it's a different story. Most of these kids HAVE TO* be there, by law. They really start off having a lot of trust in the kindergarten teacher and the rest of them in elementary school. By introducing this PC pronouns business, it's not just the confusion that it will cause later, when the little on grows up enough to understand. It's the trust that kids have in this teacher that she (unfortunately 95 % are she) is even trying set an example of a sane person - the kid may see here 7 hours per weekday!

Hell, here at Peak Stupidity, not only do we not use "Mx.", but we haven't even used "Ms.", the bullshit name-prefix introduced by the feminists back in the 1970's - I wonder how many readers even know that. I stick with "Miss" unless I know for sure a woman is married, in which case it's "Mrs." There are other words we can use in case a woman doesn't like the traditional terms.

* With the exception of home schooling which is recommended and greatly admired by the Peak Stupidity staff. (Yes, there's private school, but you'd be surprised at the PC nonsense there too, especially the Catholic schools - more about that in another post.) 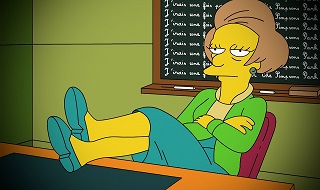 “Ha!” ―Edna's catchphrase
“Do what I mean, not what I say.” ―Edna Krabappel
“No matter what you've done I always thought there was a spark of decency in you, Bart Simpson, but I was wrong. I never thought I'd say this to a child, but you are bad on the inside.” ―Edna Krabappel

Moderator
PS - Agreed, both. In the South, there is "y'all" to help out, and in New York (at least from what I've heard from Archie Bunker) there is "yous guys" - kind of cumbersome, the latter. That only solves 2nd person problems.

Thanks for the comments, dudes, and sorry for the late reply.

"Hey, Bressack." works for me. Yeah, or "Hey, Miss nutcase", in this case.
TheCheese
PS Sherlock, that's a great suggestion! We really do need useful pronouns that'll let you specify which of several people you mean. That's a worthwhile use off weird pronouns.
Sherlockohms
PS Even our current meager number of pronouns sometimes confuses me: "You mentioned 3 women in your 1st sentence, and said 'she' in your second. Who the hell are you talking about?".
So if I was young again and in that class, "Hey, Bressack." works for me. Give it a try.