School "Resource Officer", aka cop - would have NEVER been seen through the 1980's in normal* America. 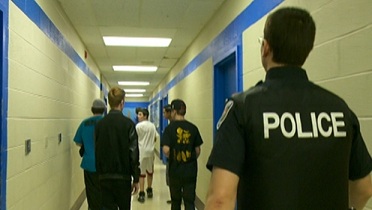 As stated before multiple times here (see TV, aks, Gov't Media) on the Peak Stupidity Blog, we don't do infotainment. It would be hard not to know about the school shooting in Parkland (Ft. Peirce, basically), Florida, without being a modern-day Ted Kaczynski. However, after a day or two of Lyin' Press fulminating and speculation - "there's a guy named Cruz who was a white nationalist" "Oh, and is this the same Nicholas here, with his name just spelled differently?" - I can get the gist of the story.

After that point, the pictures and video, stories from this witness, sorrow of the family members, all of it, become just infotainment**. It's no longer about putting out a story. There must be a few weeks or close to a month of pissing-and-moaning "searching for answers" appearing on the small- (but getting bigger) screen at least hourly, so people can, you know, keep up. It works great for the Gov't Media, aka Lyin Press for two reasons:

1) The agenda can be pushed onto the public for hours daily, and as written, extending on for weeks, if not months.

2) Whatever brings in the viewers will, as they see it support the advertisers, bringing in the big bucks.

What I hadn't heard about until this morning, from a friend, was the story on the school cop, aka "resource officer" who displayed cowardice that was absolutely NOT part of his job description, else his $80,000/year job wouldn't be necessary. (Granted, that may not stop the schools anyway, as living large off of taxpayers' money makes one kinda spendthrift.) Here is a down-under-Lyin'Press link on story that just came up from a search under "cowardly cop Florida shooting": Armed deputy who didn’t stop Florida school shooting thinks he ‘did a good job’, but it is short and unexpectedly just to the point.

School resource officer Scot Peterson, who has resigned in disgrace from the Broward County Sheriff’s Office, was “distraught” about the shooting that killed 17 people — but believed he did his duty, according to the president of the Broward Sheriff’s Office Deputies Association.

I can believe "distraught", as there's no going back from big mistakes sometimes, and that's a bad, bad feeling. I'm guessing the lack of action by this guy on the SOLE RARE EVENT that might justify his job was due to years of uneventful time at the school. I'd think, though, that I'd have had at least some bit of a Walter Mitty type mindset, just daydreaming of how I'd handle something like this and BE a hero, not a coward.

We always hear from the men in blue, or their union spokesman, that "we all want to go home at night to our families". Hey, I get it, but there's a job to do. It does get dangerous for some cops, I understand. You signed up to guard a school, a job that would have been seen as ludicrous in 1975, but as requested by parents and the school board nowadays. There was your chance to do your job. OK, parents, what do you think? Do you still want to blow our tax money on resource officers?

Now, also, do you anti-libertarian police sack-hangers out there still think that the cops are all our heroes? This was what this guy was THERE FOR, and yes, I KNOW I'M REPEATING MYSELF AND WRITING IN ALL CAPS! Between this type of event, the general anti-constitutional attitude of a majority of the police I've run into, along with the plain anarcho-tyranny as seen back in Charlottesville, Virginia***, I believe we patriotic normal Americans are on our own. "To Protect and Serve"? Nah, don't count on protection and don't count on service, other than of warrants. 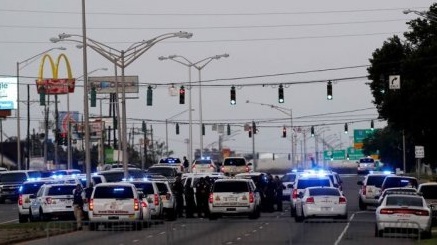 * I'd like to link to this superb column by Mr. Fred Reed that tries to explain how America has changed to end up with school shooting as bi-monthly occurrences. Please read the whole thing.

** This is in no way to diminish the sorrow of the parents, brothers and sisters, and friends of those killed, and of the ones seriously hurt. I just got it after hearing details for a minute or two. Peak Stupidity has discussed the way men vs. women deal with this sorrow in a post about that south Texas church shooting last fall.

*** This could be a separate post, but I just wanted to guide the reader to the latest news on the continuing legal portion of the Anarcho-tyranny of that Charlottesville ruckus. Jason Kessler, heavily involved in it, reported more about it on VDare today.


**** What, why all the asterisks? Peak Stupidity is trying something a little different, some footnotes to avoid the run-on sentences. Which is more annoying? Let us know!

Moderator
PS: "Not giving info to comment is also not an annoyance!"

You SEEM a little annoyed by the latter, Earthworm - I'm just going by the exclamation point. I really hope you didn't lose a lot of writing. I have to do this or my dBase was gonna get filled up by idiotic spam programs.

I've lost a few comments myself, but I have gotten the habit, on other sites lately, of ctrl-A, ctrl-C before I post, just in case it gets lost.