It's that time of year - THE STATE is coming for your kids.

Yeah, it's the new, new math.. you wouldn't understand.
THIS! IS! GRADUATE! SCHOOL! 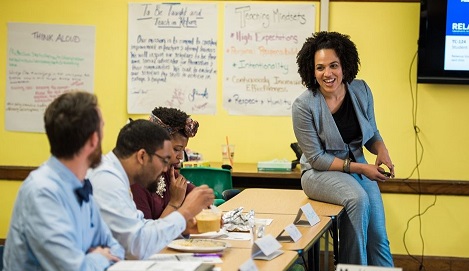 Now's that time of year, parents!: Let's go out an buy those colorful notebooks, markers (they're not magic anymore, I guess), backpacks, and school supplies for all those other, destitute kids that don't have crayons, even though the school has enough tax money to afford a 2-member attendance committee with laptops that generously sends registered letters to any sick kid's Mom who forgot to follow PROCEDURE(!) last week. Maybe they'll miss the little ones being around all the time, but it's probably all about the schedule, Mom's work fitting in with Dad's, so they don't need the day-care (bad) and the play-dates(better).

The Education Establishment, we call him Big-Ed, for sure LUVS, LUVS, LUVS to have your kids to indoctrinate for another 9 months at 7 hours daily, hopefully 10, for 5 out of 7 days weekly. This is how THE STATE instills the proper attitudes in the young people, that respeck for authritah, the understanding of the need for government programs and rules, and the Political Correctness, I mean, it's in all the videos, books, and on-line, tax-payer bought, PBS Kids, Raz-kids and all that computer jazz. The open minds of the youngest ones, especially, have got Big Ed and his Minions salivating for the opportunity to PRODUCE a right-thinking crop of new Comrades citizens.

On the year-scale, on the front-end, they've got pre-K now, when we didn't even have to go to Kindergarten (if we did, it was for 3 hours). Then at the back-end, when the children have been stupiditified from the first 13, then the next 4, we expect at least a Master's (Hey, why not in Education? I like recursion as much as the next guy.) for another year. We're up to 18 damn years now, of this Big-Ed crap! Now, at the daily level, there after after-school programs, before-school waiting-around (when the parents have to go to work early) and all that too. The State had a large hold on the mind of your children. We need to keep it to a MINIMUM, people.

The Peak Stupidity blog has written 3 posts, part 1, part 2, and part 3, on homeschooling as a way to poke the big beast in the eye. In other words (though not having practiced it yet) we are very much in admiration of this type of real education. That is the best solution to the problem of Big-Gov getting ahold of your kid's minds. The next best is keeping them home for as many hours as possible. Yeah, you can make those extra bucks, but what's the point of your even sacrificing for the kids, if you're going to let THE STATE raise them?

I want to write some more shortly on nature's vs. nurture's effects on the traits and personalities of our little, and later big, ones. I may add quite a bit to this post later today, but also, I've got a couple of other posts coming on this.


Moderator
PS - Kudos to you, BernCar! Ast to your last sentence, I'm not sure if I wrote a whole lot about that, but I know I wrote something. Yes, you DON'T need that Masters in Ed - it's be a big hindrance, in fact. Get the kid reading first, and then assign stuff at will. One can get in more learning in 3 hours that then 7 hour school day includes.
BernCar
PS I was in a position to homeschool my grandson for a few years. When that was overtaken by other events, his parents by that time were able to afford a private religious school for him. He was able to start there at a level ahead of his age group and by then had supreme confidence in his intellectual ability. I look back on the homeschooling as one of the best things I've done with my life, and the experience created a bond with him that will last a lifetime. Materials for schooling are readily available and no one should doubt that he or she will do a much better job no matter your educational level than the government teachers.